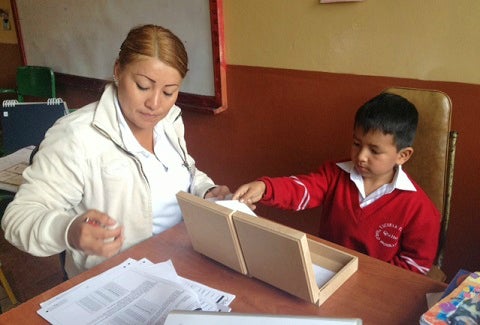 What makes a teacher a good teacher? Although teachers are mostly selected according to what is showcased in their curriculum vitae, those credentials are not what matters most, according to Cerrando Brechas (Closing Gaps), a multi-year study to measure the effects of better teachers on child learning in the first years of elementary school carried out by the government of Ecuador who requested support from the Inter-American Development Bank (IDB).

Identifying the effects of teachers on learning is difficult for two reasons.

First, children are generally not assigned to teachers at random, meaning that groups in different classes are not necessarily homogeneous.

For example if a teacher is assigned the best students of a group, these naturally will have a better performance regardless of his or her efforts and bias the results of studies that attempt to measure the contributions of teachers to learning.

Second, it is hard to distinguish good teachers. The characteristics of teachers commonly found in administrative data, which largely determine teacher pay and promotion, generally explain very little of their effectiveness.

To address these concerns, for the first time in a developing country, Cerrando Brechas randomly assigned an entering cohort of approximately 15,000 kindergarten children to teachers within schools, and collected unusually rich data on teachers, including filming teachers in the classroom for a full day. With these data, researchers were able to distinguish better teachers.

At the end of the academic year, researchers measured the performance of children through 12 different tests ranging from math to early literacy, and a variety of cognitive processes known as “executive function.”

Executive function tests measure the ability of children to exercise self-control, pay attention in class, and switch between tasks, and have been shown to be highly predictive of a child’s capacity to learn in school and succeed in life.

What does an effect size of 0.11 standard deviations mean?

If, on the other hand, the child of a mother with less schooling is assigned to an “outstanding” teacher (a teacher at the 95th percentile), while the child of the mother with more schooling is assigned to an “average” teacher (a teacher at the mean), then the difference in learning results between the two children at the end of kindergarten will be substantially smaller—0.6 standard deviations.

In other words, within a single year, being assigned to an outstanding teacher, rather than an average teacher, allowed the child from a more disadvantaged background to close one-quarter of the gap that separated her from a child with a more advantaged background. This is a sizable effect.

“Rookie” teachers (those with three years of experience or less) produce significantly less learning than more experienced teachers, but none of the other characteristics of teachers, including whether a teacher is tenured or works on a contract basis, her IQ, and her personality, consistently predict child learning.

On the other hand, teacher behaviors determine how much a child learns in school—in particular the extent to which a teacher provides emotional support and instructional support, and manages the classroom well.

First, it is hard to measure the effectiveness of teachers before they enter the teaching profession; screening tests for teachers therefore have only limited value.

Second, because some teachers are consistently more effective than others, as measured by the amount of learning that takes place in their classrooms, policymakers could consider programs to reward the most effective teachers, and to separate teachers who are consistently very ineffective from the teaching profession.

Third, many of the teacher behaviors that affect student learning have been shown to be malleable. Policymakers could therefore experiment with pilots of innovative ways of providing in-service training to teachers as a way of improving their effectiveness, and carefully evaluate them.

Cerrando Brechas is an ongoing study. Researchers are following the original cohort of children into first and second grade to assess whether the impacts of having a better teacher in kindergarten are sustained through time, and how these impacts interact with the quality of teachers children are exposed to in later years.

This story is part of our impact evaluations included in the Development Effectiveness Overview, a document published on March 2015 and that highlights the lessons and experiences of IDB projects and evaluations.

These are some of the posts of the series:
– Symphony for Peru: music and social inclusion together
– Lessons from Honduras’ CTT program: conditionalities matter
– Opening the English world for native Spanish speakers