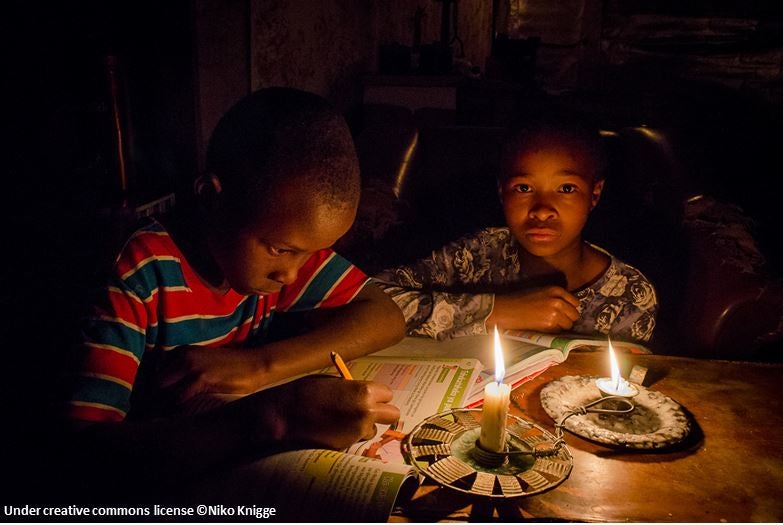 Imagine life without access to electricity.  No TV, no fridge, no washing machine! (Have you ever had to consistently wash all your clothes by hand?)  When I was a child, I spent summers in my grandpa’s ranch in the plains in Venezuela, without access to electricity (because of the ridiculously low population density).  I loved being in contact with nature, so I did not miss the TV at all. I especially loved the big family gatherings after dinner and hearing stories lighted by the moon (because, without being able to see much, there was nothing else you could do but gather and talk).

I hated having to wash all my clothes by hand, though (oh man, I love a washing machine; I think it is the best invention after electricity). But it was OK, because I knew that that lifestyle was temporary and that back home, we were lucky enough to enjoy many amenities (including a washing machine).

For many people all over the world, no electricity is a permanent condition.  For them, most activities end shortly after sunset, they are limited in the way they preserve food (and then in the type of food that they can regularly consume), they have limited access to information, and not much time to read, because their time is consumed by activities that could be shortened and simplified by the use of electricity. A case in point: a washing machine.

Providing access to electricity to these households is not easy, though.  The high costs of delivering electricity to rural areas and the limited capacity of households to pay for the service make it difficult to attract investment in rural electrification.  A solution, because it is often cheaper, is to use off-grid sources—mini-grids served by mini-hydro plants or diesel units, and solar home or community systems.

In 2012, the Multilateral Investment Fund (MIF) supported a fee-for-service business model that provided access to electricity—via solar-powered home systems – to remote, poor households in the province of Cajamarca in Peru.  These household had no access to electricity at all and, because of their limited purchasing power, they were willing to pay for an 11.5 kilowatt-hour-a-month system, but not for a larger, more expensive system (11.5 kilowatt hour a month is enough to power some light bulbs and a low-energy consumption radio and TV for a few hours a day, but no more).

We took advantage of the expansion supported by the MIF to design a quasi-experimental evaluation (Brief here) to gauge the impact of access to electricity in the quality of life of these households (80.8 percent live below the poverty line).  What we found is that all households use electricity for lighting, but only 19 percent of them use it for charging their cell phones (roughly 50 percent of the households have a cell phone), 5 percent use it to power their TVs, and 4 percent to power their radios (95 percent of these households have a radio).  Among the results, we found that children in households with access to electricity spend more time doing homework (9 more minutes per day) and this has translated into an advantage in school: a gain of 0.38 years of schooling for children enrolled in elementary school that have been exposed to electricity for an average of two years and nine months. This difference cannot be attributed to the children’s parents’ years of schooling, to children’s age—statistically the same—or to the location and availability of schools: travel time to school and enrollment is statistically the same for both groups of children. Moreover, although the percentage of children that completed elementary school is the same in both groups, enrollment rates in secondary school are larger for children with electricity (+11.6 percentage points).

If these differences persist over time, it is expected that children in households with electricity will be able to generate larger incomes in the future, and perhaps they will be able to afford a washing machine, which—I hope I convinced you by now—is the best invention after electricity itself. If you don’t believe me yet, try washing a pair of jeans by hand.

Irani Arráiz is a Senior Evaluation Economist at the Multilateral Investment Fund of the InterAmerican Development Bank. She holds a Ph.D. in Economics from the University of Maryland at College Park and an MBA from the Instituto de Estudios Superiores de Administración in Caracas, Venezuela. Her most recent work includes impact evaluation of programs aimed at increasing the competitiveness of SMEs in Latin America. Her current work includes impact evaluations of a microfranchise program and a training program for microenterpreneurs using heuristics.