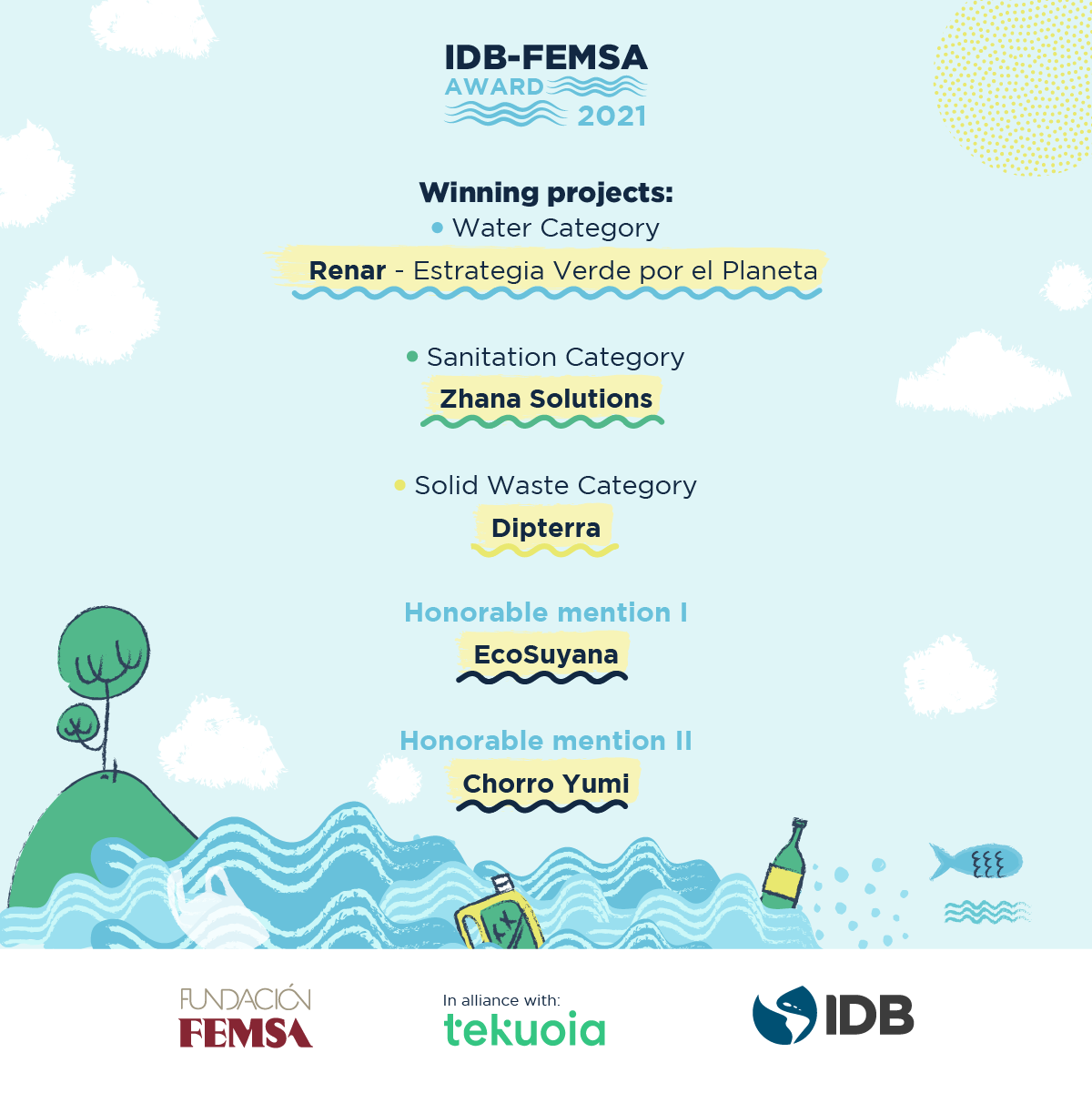 The winners of the IDB-FEMSA Award are RENAR Green Strategy, in the Water category; Zhana Solutions, in the Sanitation category; and Dipterra, in the Solid Waste category. The winner of the Ideas into Action Award is The Closing the Gap Project, presented by Empresas Públicas de Medellín (EPM).

The festival of innovation in water, sanitation, and solid waste has revealed the winners of the IDB-FEMSA and Ideas in Action Awards.

In a virtual award ceremony, the jury awarded the three monetary prizes for US$10,000 to the winners of each of the categories of the IDB-FEMSA Award: water, sanitation, and solid waste. The winners are:

The jury recognized the project that the team defines as follows: Rainwater hardly infiltrates and does not reach the aquifers. This solution has designed an installation that allows water to be stored under the surface, with two objectives: to create an underground reservoir to create a water source or to recharge aquifers.

This solution allows restaurants to centralize several of their fatty waste management micro-processes into a single one that is significantly more efficient (up to 99%), which consumes less time for their staff.

The jury also awarded two honorable mentions to the projects Chorro Yumy, from Peru; and EcoSuyana, from Argentina.

The jury also awarded at the same ceremony the Award to the most innovative water and sanitation company in Latin America and the Caribbean, which received as a prize consisting of a one-week mentoring workshop at SABESP in São Paulo, Brazil; to get to know the Innovation Laboratory of that company, which is part of its change and innovation management model, as well as advice for the implementation of Aquarating+ and a promotion and visibility package for the company. The winning utility is:

The project carries out diagnostic activities, design and construction of non-conventional sewage networks to provide sanitation services to areas that are difficult to access, both due to limited space and due to topographic restrictions, in which it is not possible to introduce conventional sewage systems, which not only expands the services but also reduces the environmental impacts on water sources.

The jury also awarded honorable mentions to the projects Minga digital and  AguaQuitoPerisfera, both presented by the Metropolitan Public Company for Drinking Water and Sanitation of Quito, Ecuador (EPMAPS), and to the GIS Technology Project, presented by the company EPS Grau, from Peru.

The Ideas en Acción Award is sponsored by SABESP and by Source of Innovation, a joint initiative of the IDB Group co-led by the Water and Sanitation Division and IDB Lab, the Bank’s innovation laboratory, in coordination with key partners such as the Government of Switzerland through the Secretary of State for Economic Affairs (SECO), FEMSA Foundation and the Government of Israel.

Congratulations to all the winners of the IDB-FEMSA Award and the Ideas into Action Award! Soon we will be announcing the opening of the call for the Awards in its 2022 edition.