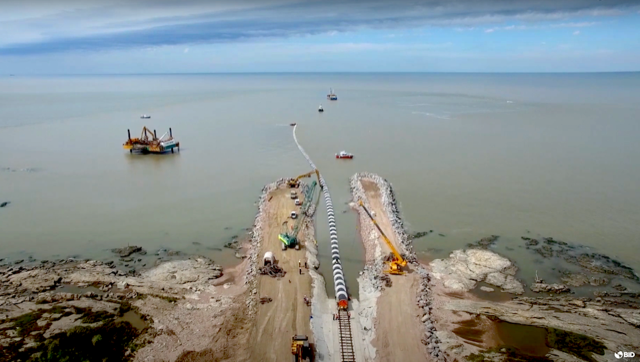 Uruguay has taken on the task of cleaning up the Bay of Montevideo from the source. Investing in sanitation networks and a wastewater plant that will no longer pollute the ecosystem.

The Cerro, a neighborhood on the western outskirts of Montevideo derives its name from the hill (“cerro”) on which it is built. The growing community is bustling with children and there is a true sense of solidarity. Shirley Maneiro, a long-term resident of the Cerro, thinks her hometown is unique. “You cross the Cerro bridge [from Montevideo] and it’s as though you are entering a little country. Living in the periphery means that you face a different reality; your daily struggle is different” she says.

The Cerro, like many neighborhoods in the periphery of Montevideo, lacked integrated sanitation infrastructure. “[when] raw sewage flows in the streets and ditches, it is truly unhealthy” claims Alejandra Bergeret, a public officer from the Intendencia de Montevideo (the capital’s municipal government). Many residents in the Cerro relied on septic tanks that sometimes overflowed. When Shirley had a septic tank, she was preoccupied about letting her daughter play outside. Rightfully so, exposure to raw sewage has been tied to serious water-transmitted diseases.

When Shirley found out she would be connected to the sanitation network, through one of the IDB’s sanitation projects, she finally felt integrated into the city. “I [now] have one of those basic services that everyone should have in the world, as it should be.” Shirley’s story presents an example of the 300,000 residents in the north and east of Montevideo who recently gained access to sanitation infrastructure through the IDB’s projects.

Becoming a part of the sanitation network is not the end of the story. Today, the wastewater of the western half of Montevideo is still released directly into the bay, without treatment. As a result, Montevideo Bay and the surrounding beaches are under threat. Hector Núñez, a lifeguard for over thirty years at the Cerro beach witnessed the change in the bay’s ecological health. When he was younger, fishermen used to go to the Cerro for sport. More recently, however, few people fish. Núñez sees the lack of fish as an indicator: “If you live in an area where there are plenty of fish, that means that the water is healthy. If not, then there are issues” he says. This pollution also threatens other ecosystems as it is transported through the Plata River.

The IDB has been actively working with the government of Montevideo on sanitation since the 1980s. In 1995, the city defined investment priorities in sanitation until 2035. Together with the IDB, they developed several integral urban sanitation plans to expand the sanitation network and reduce contamination in the city’s waterways. Part of these plans involved treating the water of the east of Montevideo. Now, the IDB is supporting local efforts to treat wastewater from the west of the city, where both Shirley and Hector live.

In September 2020, Montevideo launched its most ambitious sanitation project in the last 40 years: a system that collects, treats, and disposes of half the city’s wastewater. This system captures the sludge by linking all the discharge points and sending it to the Punta Yeguas pretreatment plant. Then, the treated water is channeled through an underwater emissary so that it can be released and spread in a way that protects surrounding ecosystems.

Thanks to this project, Montevideo bay will no longer receive untreated sludge from the entire city, bringing Uruguay’s capital close to a reality where all the residents have access to sanitation.

Hector Núñez foresees a succession of positive events once the project is fully operational: “The water quality will improve significantly. People will be able to swim without worrying and more tourists will come to fish or enjoy the beach”. With the completion of this project, over 90 percent of the population will have access to sanitation, a feat other Latin American cities have yet to achieve.

This story is full of lessons learned. Later this year we will publish a technical note with the details of this challenging and inspiring experience. Stay tuned!