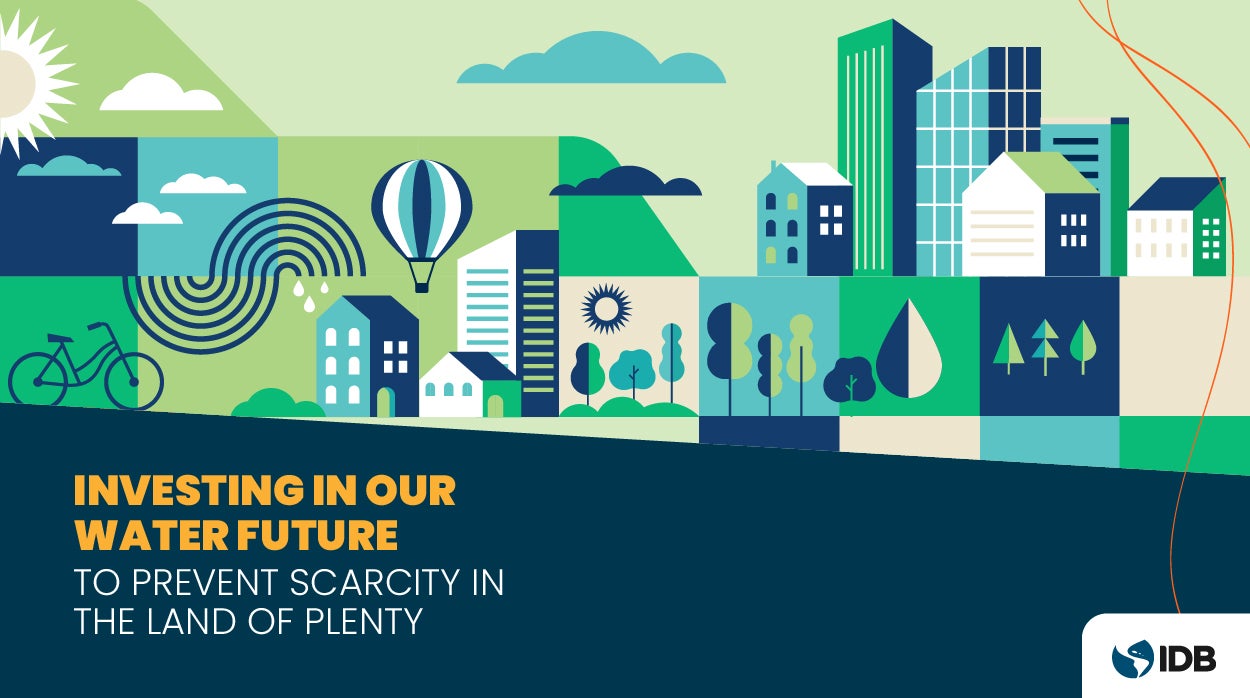 Latin America and the Caribbean (LAC) is the most water-rich region in the world with an astounding 21,672 m3 per capita in renewable freshwater resources. However, over 60% of its population lives in medium-high to extremely high-water risk areas.

A recent study by the Inter-American Development Bank’s Water and Sanitation Division that analyzed population data combined with the World Resources Institute’s Aqueduct Water Risk Atlas indicated that 35% of the region’s population experience medium-high to extremely high water stress. In these cases, total water withdrawals are at least 20% of available renewable surface and groundwater. Consequently, natural variations in water availability can lead to water shortages and environmental impacts. The population living in areas of medium-high to extremely high water risk rises to 60% when incorporating water quality, seasonal variability and water management capacity.

This large increase reveals the negative effect of the lack of institutional capacity for preserving quality and providing infrastructure on water risk. In LAC, only a third of wastewater is treated to a primary level, which has serious implications on ambient water quality. Leakage rates in distribution networks average between 20% and 50% of total water. As cities grow, decision-makers often neglect to expand distribution and wastewater networks to new communities.

In a business-as-usual scenario, the percentage of the population affected by water stress would increase to 40% by 2040. However, this is an optimistic prediction, considering these main challenges:

New technologies will be vital for improving water infrastructure management and supplementing supply shortfalls. Smart Water Infrastructure Technologies (SWIT) use hardware, software, and analytics to help water utilities solve problems through data analysis and automation. SWIT can identify water leaks in existing systems and improve the efficiency of water distribution systems. Water reuse and desalination can help augment water supply. These new technologies have the potential to provide some relief in high-risk areas and generate monetary and water savings.

These tools require a substantial level of investment in the sector, mainly from public funding. Between 2008 and 2015, private contributions represented 3% of the total sectoral investment across the region, indicating an opportunity to increase private sector participation. Public-private partnerships (PPPs) can help LAC achieve the necessary infrastructure investments while improving the quality of public services at a reasonable cost. Attracting private investment will require a reform of the current regulatory framework.

Information on current and future populations living in water risk areas across the region is crucial for policymakers to prioritize and encourage investment in infrastructure and new technologies. Population-based metrics that account for the multidimensional complexities of water stress, such as those provided in the study, are crucial to understanding and communicating water risk to policymakers and the general population.

*Jesse Madden Libra is a water and sanitation consultant at the IDB, where she specializes in water scarcity and sectoral data management in Latin America and the Caribbean. Prior to joining the IDB, she worked in data analytics, project management, and environmental policy in both the public and private sector. She holds a Masters in Global Policy Studies and a Masters in Energy and Earth Resources from the University of Texas at Austin.

María Pérez Urdiales is an economics specialist responsible for the Water and Sanitation Division's knowledge agenda at the Inter-American Development Bank. She has more than 10 years of experience in research and consulting on water economics, particularly focusing on analyzing the effect of public policies on the water and sanitation sector. Before joining the IADB, María worked at the French National Institute for Agricultural Research in Paris (France), the School of Public Policy of the University of California Riverside (USA), and the Economics Department of the State University of New York at Stony Brook (USA). María holds a Ph.D. and a master's in Economics from the University of Oviedo (Spain).