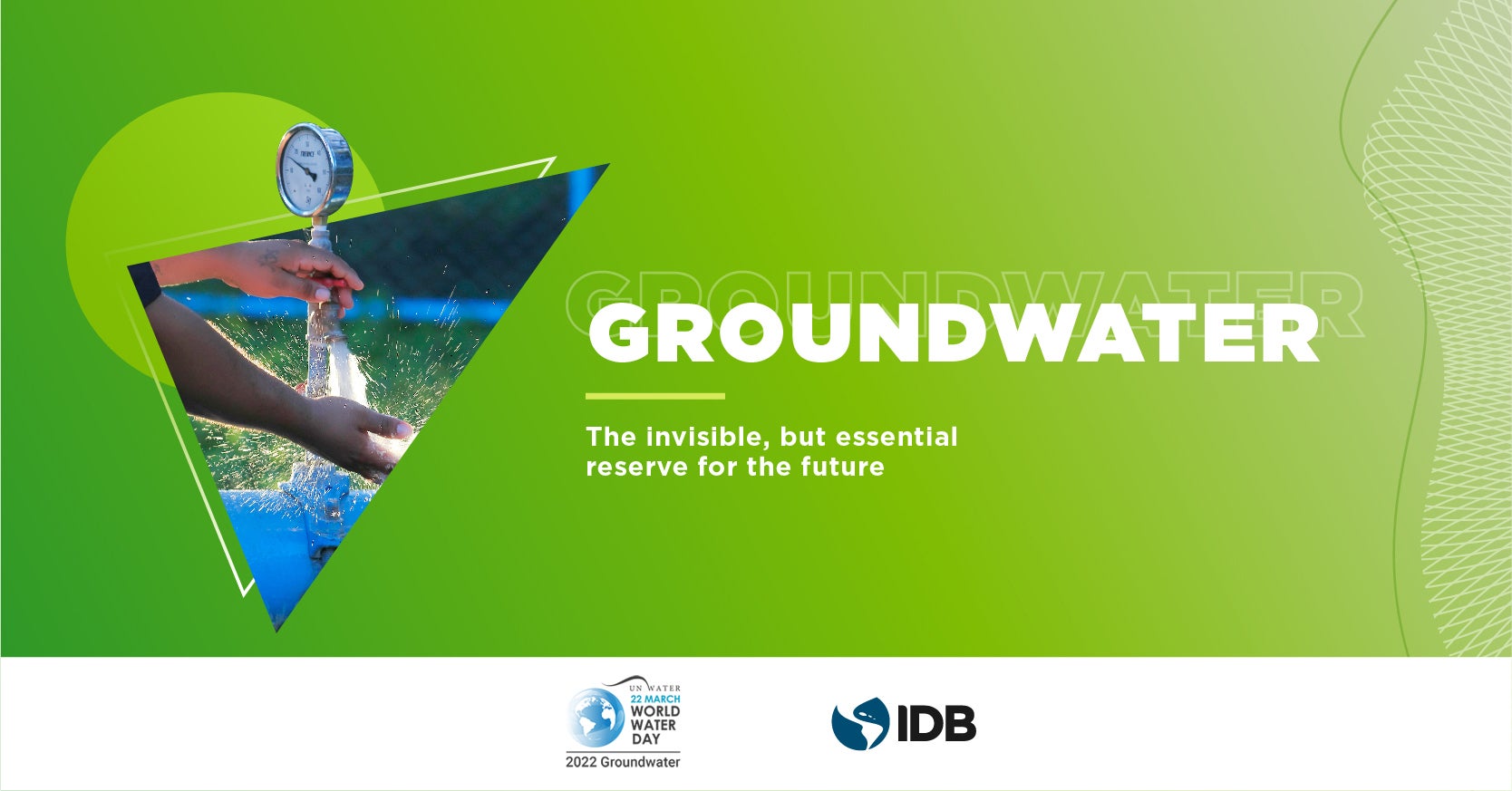 Groundwater supplies up to 60% of the water in some Latin American and Caribbean countries. They are an invisible resource, but essential for the present and future of the region.

When we think of natural water sources, we generally imagine a river, a stream, a lake, flows that we can see with the naked eye. However, under our feet, there is an invisible reserve, but essential to satisfy human needs: groundwater.

Latin America and the Caribbean (LAC) is rich in surface water resources; however, those basins are not homogeneously distributed and there are many areas that depend on groundwater. Groundwater supplies between 40% and 60% of the water demand in the region, which includes agricultural and urban use. In fact, in capitals such as Mexico City, Port-au-Prince, or Guatemala City, they constitute the main source of their supply.

LAC is characterized by having one of the highest demographic growth rates in the world. With a population of more than 600 million inhabitants, there is increasing pressure on natural resources, due to the intensification of land use, increased urbanization, climate change, and natural disasters. This pressure is also suffered by aquifers. On one hand, urbanization and deforestation prevent its recharge; on the other hand, pollution and uncontrolled exploitation pose a threat to the subsistence of many populations. The little knowledge about how aquifers work and the lack of control in their exploitation are responsible for the mismanagement of these resources.

To face this reality, the Inter-American Development Bank (IDB), through the Cooperation Fund for Water and Sanitation (FCAS), promotes the sustainable management of groundwater through programs that help communities to dig and maintain the wells that provide most of their water. It also focuses on studies that analyze the behavior of the most important aquifers in the region and measures are proposed for their preservation.

Access to water through wells: rural schools in Uruguay

Uruguay has one of the largest drinking water coverage ratios in LAC, but water supply in rural areas continues to be a challenge. The Drinking Water and Rural Sanitation Program in Uruguayan Schools, executed with resources from the Fund, provided access to water and sanitation services to 325 rural communities in the 18 provinces of the country.

Thanks to the wells, thousands of students from scattered rural communities attend schools with adequate hygienic conditions. Pablo Decoud, Manager of the Northeast Region of the State Sanitary Works (OSE) of Uruguay, says that in several localities the girls could not complete their secondary studies because they were tasked with carrying water for their households every day. Now, those young women can continue with their education without the burden of carrying water. As a matter of fact, school attendance and punctuality have improved since the wells were installed.

Extracting water from wells is an ancient practice in most parts of the world. However, to avoid the depletion of aquifers and their contamination, it is necessary to adopt key measures, such as the establishment of a protection perimeter around wells.

The program not only incorporates elements of environmental conservation of aquifers, but also technological innovation. Some wells work with solar pumping systems, a clean and sustainable solution. Additionally, digital micrometers have been implemented in strategic areas to verify the correct operation of the system.

The program also encourages citizen participation, through training for communities to empower themselves and take ownership of the systems. As a result, citizens have become key players for the maintenance and responsible use of infrastructure. Residents communicate about problems in the system through social networks and digital channels, which allows the deployment of quick solutions. Women play a fundamental role in this project, especially the rural schoolteachers, who maintain direct contact with the inhabitants. The girls and boys have participated in educational workshops to train them as “ambassadors for water”, to ensure the sustainability of the project.

Groundwater is increasingly relevant to water security in Latin America and the Caribbean. The second line of work of the Fund focuses on the development of tools and studies to better understand some of the most important aquifers in the region and to develop sustainable management plans for groundwater.

These works have been financed with resources from the Latin American Investment Facility (LAIF) of the European Union, which are managed by the Spanish Agency for International Development Cooperation (AECID) and the IDB, as part of the program “Promoting the adaptation to climate change and the comprehensive management of water resources in the water and sanitation sector in Latin America within the framework of the Cooperation Fund for Water and Sanitation (FCAS)”.

One of the studies focuses on the Patiño aquifer (Paraguay), which is the main source of water in the Asunción Metropolitan Area (AMA). The Fund financed the study of climate vulnerability and susceptibility to contamination of the aquifer, in which a comprehensive management plan and a proposal for an institutional scheme with measures for its proper management and protection were developed. These studies include diagnostics, a mathematical and hydrological model, a monitoring plan, and measures to prevent contamination and/or depletion of the aquifer.

Another project worth highlighting is the development of the Groundwater Monitoring Platform for Latin America (PASAL). Based on the principles of participatory monitoring, it obtains information from two sources: satellite images and data from geographical surveys. It is an open platform where professionals can also upload information and contribute to the development of updated baselines of the main aquifers in Latin America. LAC has 29 transboundary aquifers, but accurate data about them is limited. PASAL aims to increase the knowledge about those international aquifers with the development of the platform, which will allow the analysis of essential aspects for regional management: real dimensions, geological characteristics, water reserves, and exploitation rates. The platform will be available to the public shortly.

This platform and all efforts to study, preserve and use groundwater sources in a sustainable manner are fundamental strategies for surviving climate change and for achieving Sustainable Development Goal No. 6: Water and sanitation for all by 2030 in a world whose population is constantly growing.

To learn more about our work in preserving underground waters read:

*María Augusta Olmedo is a Communication consultant for the Fund for Water and Sanitation of the Spanish Cooperation Agency (FCAS), and the IDB. Paulina González collaborated in the preparation of this article. The video was made by Mauricio Lupera.