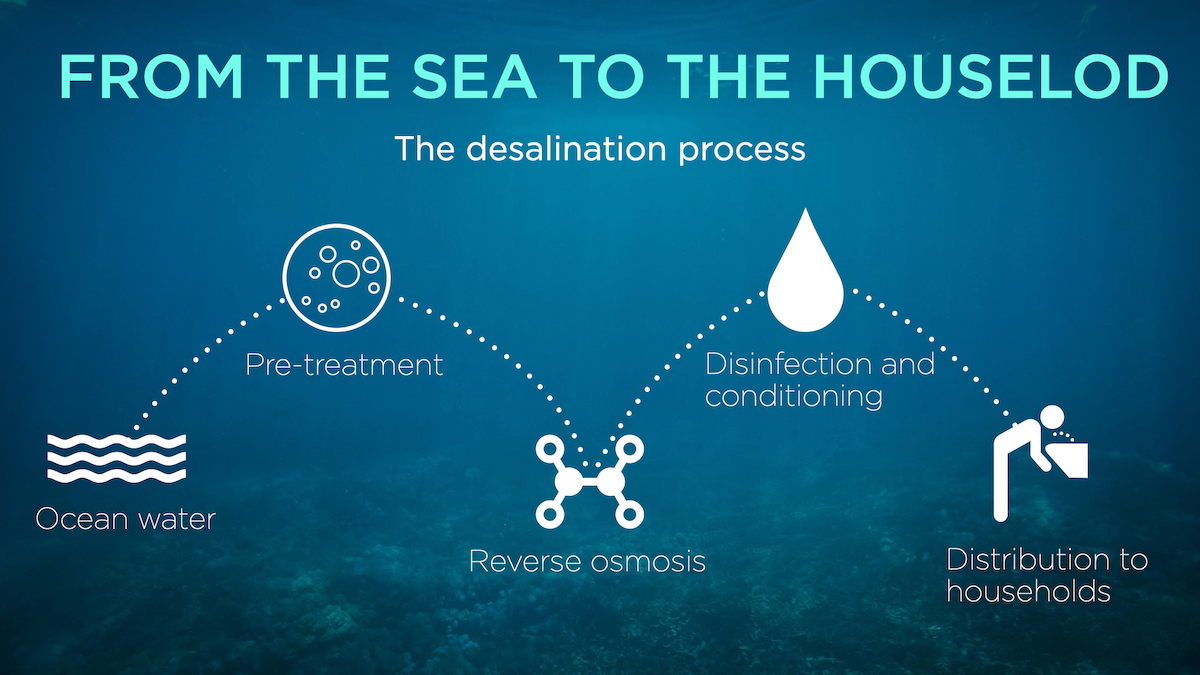 Did you know that oceans, lakes, seas and other open bodies of water could one day become the most important sources of freshwater? Desalination technologies offer a bright path ahead

Having a safe and quality water supply is essential for the socioeconomic well-being of today and tomorrow. Technological innovations that provide quality drinking water are essential for regional growth, economic success, and peace.

With over 18,000 plants in over 150 countries around the world, desalination is becoming a major source of potable water. Over 300 million people depend on these plants for municipal, industrial, and agricultural purposes. Currently, about half of all desalinated water is produced in the Middle East and North Africa.

In recent years, Latin America and the Caribbean (LAC) has become one of the biggest emerging markets for desalination. As of 2020, the continent hosts 30 plants and plans to invest more than USD 25 million in future projects. Chile, which already has 18 plants, intends to build Latin America’s biggest solar-powered desalination plant in the Atacama Desert to meet its mining and municipal water demands. Peru uses the water from its five plants for agricultural, industrial, and municipal needs. Other plants exist in Mexico (5), Colombia (2), and Argentina (1).

However, the region is far from universal access to clean water. According to a 2010 study, in LAC, in one year, more than 12,000 children under the age of 5 died from diuretic diseases, after consuming contaminated water. In fact, although LAC hosts more than 30% of the planet’s freshwater resources and only 8% of the population, many countries still face water scarcity. The extended drought in Central America foments mass migration. Mexicans routinely face water shortages, particularly in the Southeast. Between 2012 and 2015, Brazil experienced its worst drought in almost a century. The largest reservoir of São Paolo, a city of 22 million residents, lost 75% of its capacity in 2014-15. And the list goes on…

Even without the pressure of droughts, poor families typically pay between 1.5 and 2,8 times more than their richer counterparts for water. Rural communities often rely on water trucks and bottled water, as they are not connected to the cities’ infrastructure networks. Throughout Latin America and the Caribbean, 77 million people still lack access to potable water.

Due to its desertic location, Israel faces a shortage of natural water resources and extreme weather conditions. Therefore, it needs to manage water storage to compensate for dry periods. The government uses three strategies to address water scarcity: demand mitigation, reuse of treated sewage effluents and desalination. In Israel, educational campaigns promote best water saving practices; 85% of treated sewage is used for irrigation; and desalinated water accounts for 75% of municipal use.

The country is now considered a global leader in desalination. In the 1970s, Tahal, the governmental engineering corporation in charge of water planning, launched a national desalination plan. Today, five huge desalination plants provide approximately 70% of the country’s drinking water. Some of these facilities are among the largest in the world. The government supports private innovation as well as public-private partnerships through incubators. Municipal utilities receive subsidies for real-world testing of new ideas. When a new technology succeeds in one city’s system, it is quickly adopted by other water utilities. They also use simulation models to reduce uncertainties in water management. Thus, Israel is at the forefront of water technology innovation, providing the water-stressed country with reliable and high-quality water.

Desalination is not a solution without challenges of its own. High production and transportation costs limit its positive impact in disperse, rural areas. Energy efficiency remains one of the toughest problems for desalination plants; energy costs can reach between 35 and 50% of total operating costs. Greenhouse gas emissions and brine wastewater generated by desalination plants have negative environmental effects.

Luckily, several organizations have come up with solutions to address these issues. Smart technologies, such as Blockchain, big data, artificial intelligence and machine learning have proven to increase operational reliability, improve energy efficiency, and reduce the carbon footprint of desalination plants. ACCIONA is a global leader in water solutions that supports and promotes these new technologies to further water digitalization. Almar Water Solutions provides technical capability and financial tools to help develop desalination plants around the world. Their technical advice helps governments and companies manage costs. Similarly, Remote Waters brings desalinated water to areas in need. Their small scale, solar-powered desalination plants strive to bridge the gap between those who have access to clean tap water and those who rely on trucks and plastic bottles in coastal communities. E-METS, a start-up, developed a new award-winning desalination system that uses low heat, thereby lowering energy costs and reducing industrial wastewater discharge. By making desalination more sustainable and affordable, these advances can have a profoundly beneficial impact on global water resources, which can in turn reduce inequality and improve lives. The Inter-American Development Bank mainstreams innovation in water utilities.

Find out more in our BBL: “Desalination and innovation: a look towards the future of water and sanitation in Latin America and the Caribbean”

Water in Latin America: Abundance in the midst of global scarcity. A MOOC developed in collaboration with the Universidad de los Andes of Colombia, where different visions and professions come together to build alternatives that help understand the global water crisis.

Water 2.0: Efficient companies for the 21st century. Get a comprehensive vision of the sustainable management of companies that provide water and sanitation services and discover AquaRating: an international success model to encourage the transformation of this type of company.

AquaFund: A collaborative, leveraged and effective financing tool. The AquaFund, created in 2008, is a successful multi-stakeholder collaboration that has been effective in increasing the funding towards the sector in LAC, and in channeling those resources through a programming that puts together the strategic priorities of the donor community, the private sector and the governments of the Latin American region.