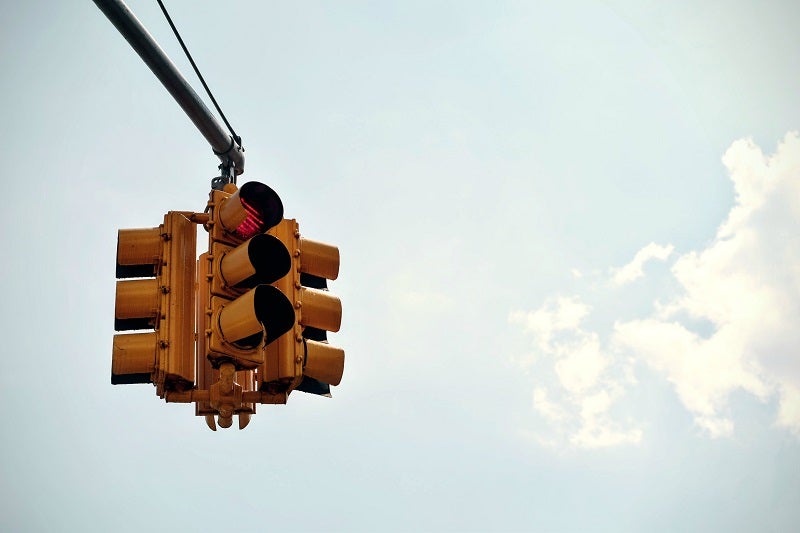 To learn more about this issue, see chapter 2 of Out Of the Border Labyrinth, a report published by the IDB’s Integration and Trade Sector, and IDB Working Paper series no. IDB-WP-705, “Customs”.

Traffic lights are an integral part of the urban landscape and have regulated the movement of vehicles through cities for much of the last century. What is less well known is that a similar mechanism governs trade flows across borders. Customs agencies process all shipments that enter and leave their respective countries to ensure that these comply with the relevant trade regulations and security standards. They carry out different types of checks to achieve this. Some shipments are not inspected (the green channel), others are only subject to document checks (the yellow or orange channel), and some undergo thorough physical and document inspections (the red channel). These different processing channels are rather like a border traffic light, in that shipments that go through the green channel can move across the border without stopping, while those that are assigned to the yellow/orange or red channels are held back. Shipments that go through the red channel experience much greater delays, as processing them implies a physical inspection, which brings them to a complete halt.

To assign shipments to different channels, customs agencies are increasingly using risk management systems to determine as accurately as possible which shipments should be inspected, so as to minimize interference with trade flows. Some of these risk management systems are more sophisticated than others. In the most basic versions, the selection criteria fundamentally consist of blacklists of importer and exporter firms, goods and origins or destinations that have been established by drawing on basic information from customs declarations and past offenses, in addition to a random factor to prevent the process from being entirely predictive. This typically results in low efficiency levels: in other words, large numbers of inspections  but few irregularities.

The more advanced versions make intensive use of econometric tools, which they apply to a wider set of data generated by customs information systems and those of other agencies and authorities, especially for imports. This data may include agents, flows, checks and results, as well as infractions that have been duly recorded (for example, the importer firm, the exporter firm, the mode of transport, the shipping company, the customs broker, the goods in question and the origins/destinations, among other factors) and may also include intelligence operations. This more integrated approach is generally associated with increased efficiency without negatively impacting security or revenue from duties.

The channel that a shipment is assigned to is highly significant: customs dispatches take considerably longer when shipments are inspected. Transaction data for Uruguay for 2003 and 2011 revealed that shipments processed through the green channel were always dispatched in a day (in other words, the same day that the broker requested the channel in question), while shipments of goods that were assigned to the red channel could take more than a day to be released, sometimes much more (figure 1). 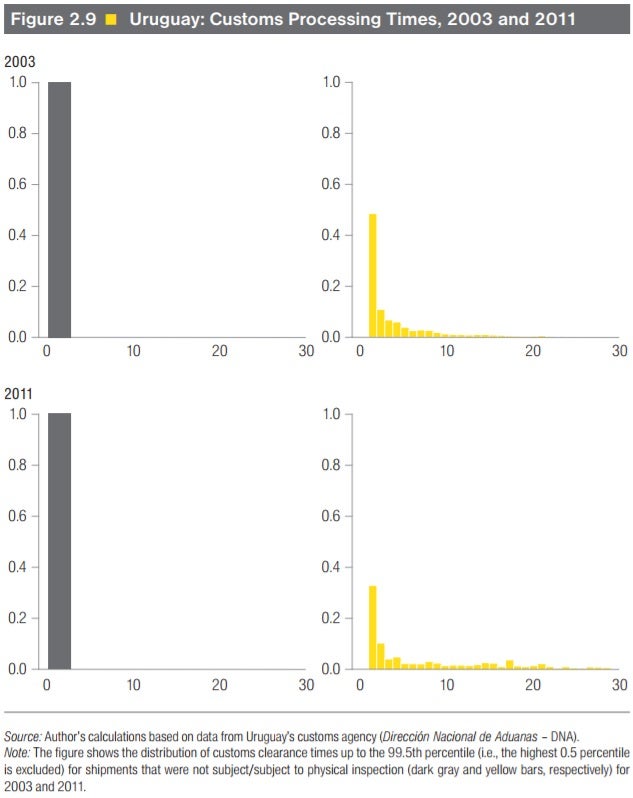 Processing times have a negative effect on firms’ exports and imports

These delays that are due to customs inspections could be seen as trade costs, which firms could respond to by adjusting the quantity and size of their shipments. In turn, these could bring about changes in their foreign purchases/sales. Indeed, the evidence clearly indicates that longer customs processing times result in fewer exports and imports (figure 2). 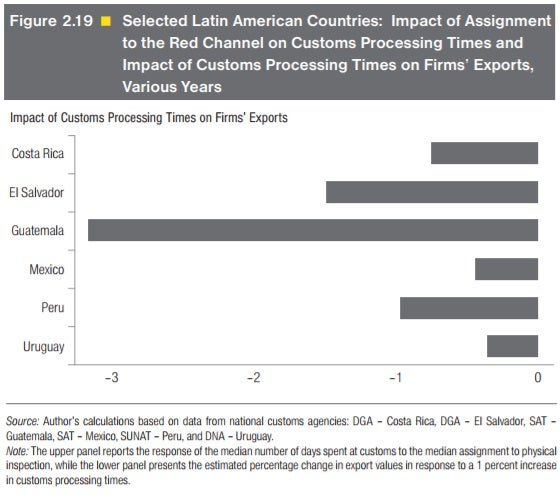 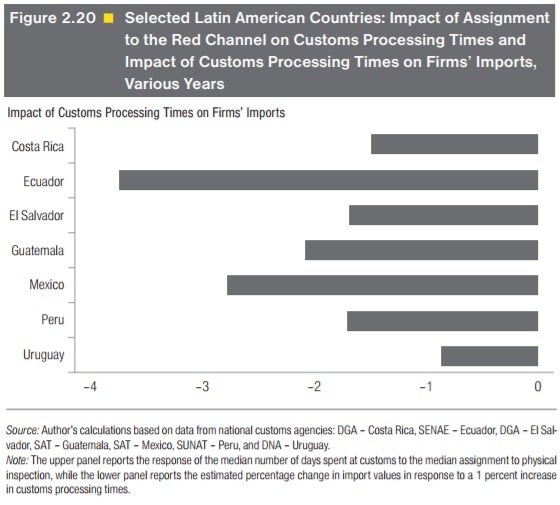 Processing times do not affect all trade relations equally. The impact of these times depends on how mature each relationship is—their effect is greater on exports to new buyers and tends to fade as trade ties between firms become more established (figure 3). One possible explanation for this is that buyers are not fully informed of the causes of delays to deliveries. When trade relations are in their early stages, it is particularly difficult for buyers to establish whether these delays are the responsibility of the vendor firms or whether they are due to factors beyond their control, such as customs inspections. More commercial exchanges bring greater volumes of information for trade partners and about each other, so the effects of imperfect information begin to wane. 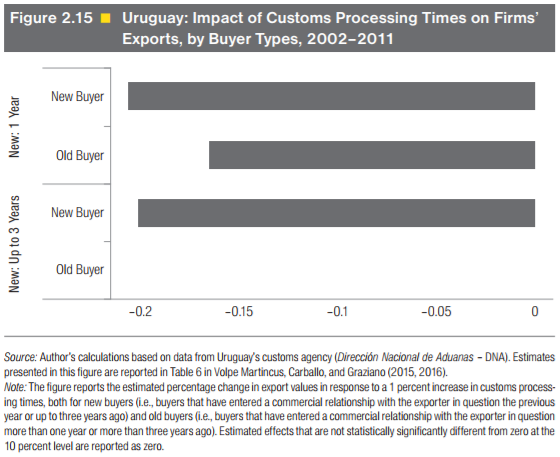 The evidence above contains a clear message for customs agencies. Implementing risk management systems, rather than subjecting each shipment to physical inspection, should be a key component in trade facilitation strategies. These systems should apply appropriate econometric techniques to make the most of all relevant information available so as to improve the effectiveness of the selection process for inspection targets and further facilitate trade by cutting back on exhaustive inspections. This implies going beyond the information generated by customs information systems based on the processing of past declarations and including data from other organizations and agencies such as national taxation entities. The following example is a good illustration of this. By definition, new exporters, importers, and exporter–importer relationships do not have background histories with customs agencies and thus are typically targeted by their risk management systems. However, not all firms that are trading abroad for the first time are the same. New importers and exporters may include many well-established firms whose tax and social security histories are beyond reproach. If customs organizations only use data from their own systems and do not take advantage of information from other public entities, such firms will be seen as just as risky as those that have only just been created and thus will be treated similarly. The effects of this situation on trade are substantial: as described above, the longer customs processing times that come with physical inspections are particularly harmful to new trade relationships. This may even work against the activities that other organizations are engaged in. Trade promotion agencies are one such example, in that they focus specifically on increasing and diversifying exports by establishing new commercial relationships.

The author wishes to thank Marisol Rodriguez Chatruc and Mariana Sobral for their support in the creation of this article.