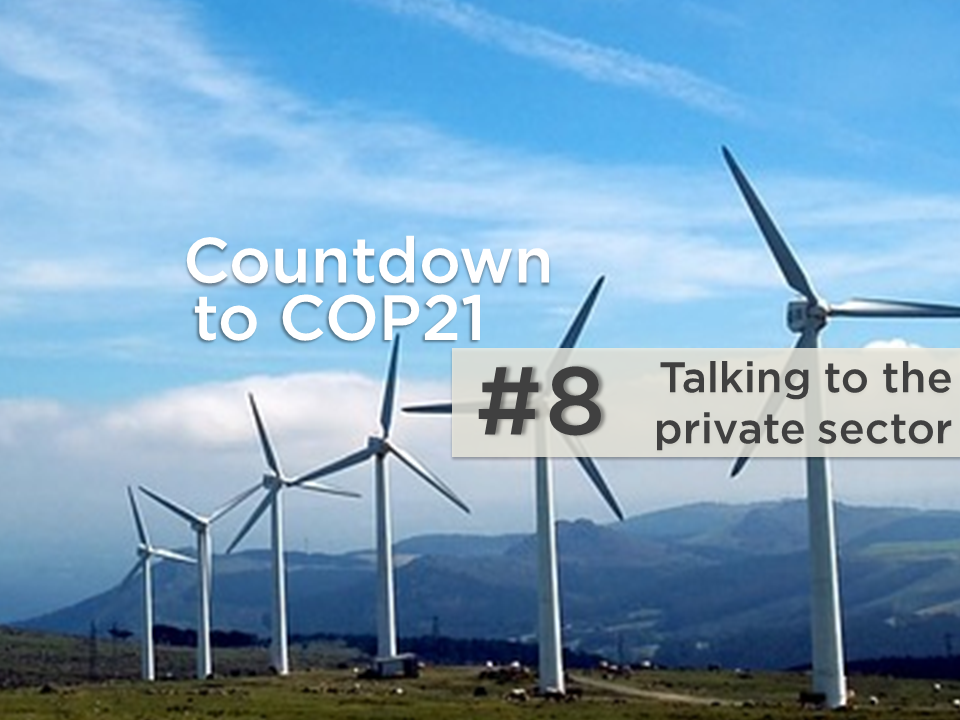 The hopes are high for the UN Climate Change Negotiations in Paris at the end of this year. Nothing less than a universal, legally binding agreement to combat climate change is at stake.

To make the necessary emission reductions that will allow us to limit future temperature rise to 2°C, a considerable increase in climate-friendly investments is required. Developed countries have committed to mobilize jointly US$100 billion a year by 2020.  Numbers on the investment needs vary but go far beyond the US$100 billion. Thus, the private sector would have to contribute up to 70-80 percent of total climate finance to make the reduction goal a reality.

Private firms and investors are not waiting for the politics. Many have realized that they can play an important role to positively affect climate change. They recognize the business opportunities that come with addressing climate change, like clean energy technologies, for example. Or they see that the long-term sustainability of their business depends on limiting climate change. Consider the agribusiness sector for instance.  Many firms have started to voluntarily express CO2 reduction and other climate-related commitments. Under the “We Mean Business” initiative, for example, almost 400 companies and investors with over US$5.5 trillion in total revenue and almost 20 trillion in assets under management have acknowledged the importance of a transition to a low-carbon economy. They are making individual commitments to get there. They are creating low carbon business models as we speak. Negotiators could learn about these blueprints.

Countries have started to publicly announce actions they intend to take under the new global agreement to be decided upon in Paris. They have done so by submitting “Intended Nationally Determined Contributions” (INDCs). Put simply, those are low-carbon business plans by countries. They will offer many business opportunities for private firms and banks, in areas as diverse as renewable energy, ecosystem services, forestry, climate-smart agriculture or the securitization of green bonds. Successful implementation of the INDCs will depend on many areas including, you guessed it, the private sector.

Putting a price on carbon will be a hotly debated topic in Paris. Next to countries and municipalities, a rapidly growing number of firms are introducing internal carbon prices or plan to do so in the short term. According to a recent UN report, “by market capitalization, around 15 percent of the S&P 500 factor in a price on carbon when undertaking investment appraisal.”

Carbon pricing is thus already becoming a factor in many investment and business decisions. Many firms are ready to steer their business models towards the path of a low-carbon and competitive economy, getting a head start on risk management and preparedness and identifying opportunities for cost savings in energy and other resources.

As Juan Ramón Silva Ferrada, senior executive director of Sustainability at ACCIONA, which has signed on to the “We Mean Business” initiative, asserts, “The time of the scientific debate is gone. We are in the post-2015 scenario now, and it’s the time for implementation. Our solutions to reduce GHG emissions and de-carbonize the economy will demonstrate that companies are acting beyond mitigation and adaptation. Companies are also creating a new prosperity decoupled from global warming. We actively support a strong agreement in COP21, as well as other initiatives in favor of putting a price on carbon as the most important mechanism.”