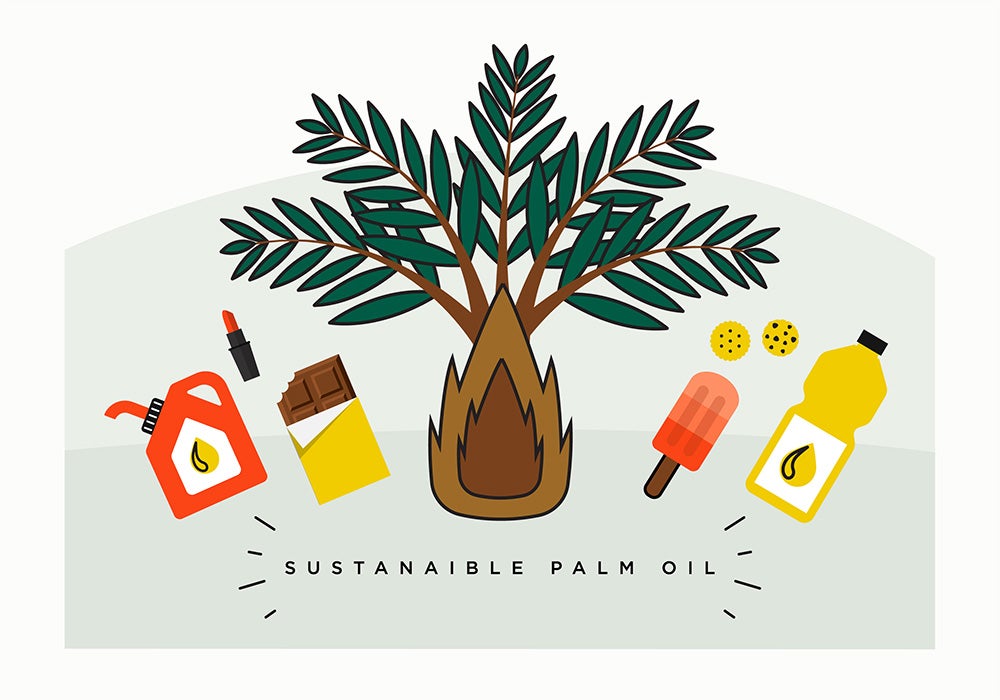 African palm oil accounts for the bulk of vegetable oil sales in the world, and it is estimated that demand for this oil will grow significantly in the near future. But how is palm oil used? Although many of us are unaware of all its potential uses in industry, we use palm oil daily in a great variety of products, such as processed foods (ice creams, cookies, spreads, etc.), cosmetics, and automobile fuel. Review the labels on the products you use frequently and you will be surprised.

Palm oil in the world

African palm is one of the most widespread crops in the world, with annual growth in areas under cultivation averaging more than 5% over the last five years. Approximately 67 million tons of palm oil were produced in 2017, according to the United States Department of Agriculture, and Indonesia, Malaysia and Thailand were the main producers with 88.5% of the total.

Four Latin American countries (Colombia, Guatemala, Ecuador and Honduras) are among the eight largest producers in the world, but together they produce only 4.8% of total global production. However, Latin America not only has the greatest potential for expanding cultivation, it also faces the great challenge of improving production per hectare under cultivation. In the region there are countries like Guatemala, which has the highest yield in the world (5.41 tons of crude oil per hectare [t/ha] on average), and others like Ecuador, where productivity (average of 2.08 t/ha) is the lowest in the region and one of the lowest in the world.

Latin American palm producers strive to distinguish themselves from Southeast Asian producers, who have been widely criticized for the deforestation they have produced. In Latin America, palm oil production has doubled since 2001 and, unlike the Asian case where more than half of the expansion occurred as the result of converting forests to monoculture, most of the land where this expansion has occurred has already been deforested. A recent study by the University of Puerto Rico analyzing palm oil plantations in Latin America shows that 79% of the expansion of the crop in the region has been developed on previously deforested land, primarily pastures for livestock and other crops, while the remaining 21% has been developed on land with woody vegetation that includes but is not limited to forests.

The large majority of palm oil plantations in Latin America is in the hands of small and medium producers (less than 500 ha) unlike Southeast Asia where very extensive plantations (between 3,500 ha and 50.000 ha) belonging to large firms or government-owned companies predominate. Not only has this had an impact on the different patterns of the crop’s expansion in the two areas, it also makes the palm oil sector in Latin America a focus of attention for development institutions.

Supporting the development of sustainable oil in Ecuador

The tropical region of Latin America and the Caribbean represents the world’s largest forested area, with suitable conditions for growing African palm. For this reason, it is essential that growth in the production of palm oil be sustainable. “We cannot continue to use the forest as an ATM,” asserts Jan Pierre Jarrin, Sustainability Director at the Oleana company, a leader in Ecuador due to its commitment to the sustainable development of palm oil cultivation.

Aware of this challenge, IDB Invest worked together with Oleana and granted it a loan in 2017 to increase its oil processing capacity. In addition, IDB Invest is supporting the company with technical assistance to reach two important goals for its supply chain made up primarily of small and medium producers:

Based on the implementation of these projects, Oleana hopes to consolidate itself as the first exporter of RSPO certified palm oil in Ecuador, which will allow it to have access to increasingly more stringent markets and to guarantee the sustainability of its production. In addition, greater productivity in the production of palm will both produce better incomes for small and medium palm-growers and allow Oleana to access increased inputs for processing without having to increase the number of hectares planted. This is a clear example of a win for all three parties: our client, the producers in its supply chain, and the environment.