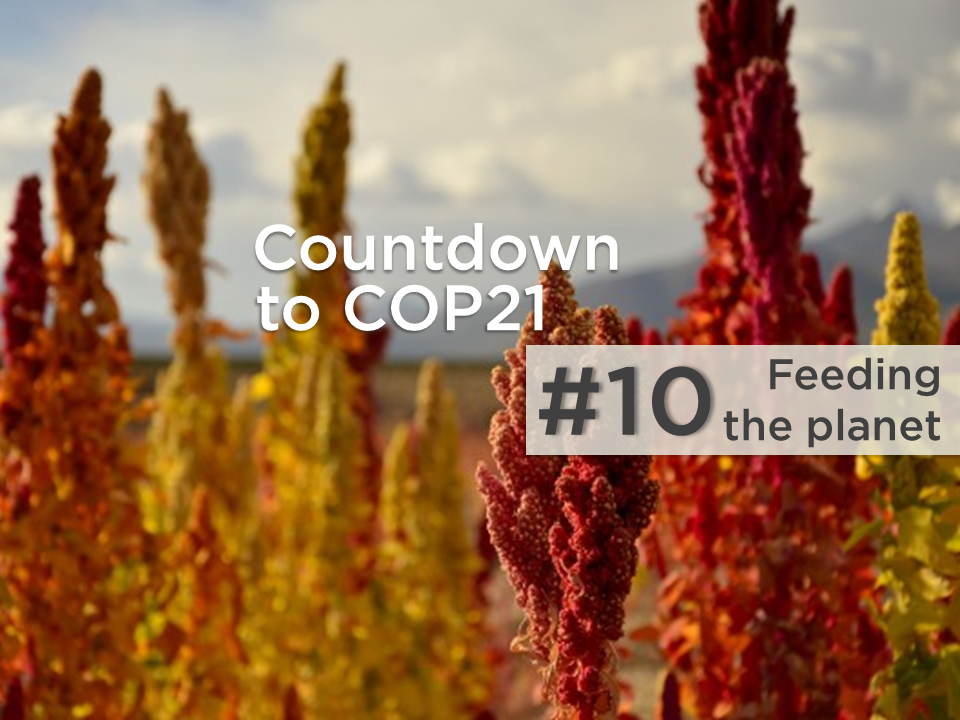 Two years ago, the Food and Agriculture Organization (FAO) declared 2013 the International Year of Quinoa. Before then, it was scarcely found outside of colorful Andean marketplaces except at boutique shops in the U.S. and Europe. Now, many international food companies are embracing quinoa and exporting this super-food from Andean countries like Bolivia, Peru and Ecuador.

Costing up to $6.99 a box for the Bolivian red variety, a thrifty shopper in the U.S. may still prefer to stick with the $0.99 box of rice. Yet, more and more health-conscious consumers are switching to this gluten-free food for its highly nutritious value and anti-cancerous properties. But the quinoa fascination extends beyond health and wellness.

Last week, the Expo Milano 2015 came to a close after six delicious months. Millions of visitors passed through its gigantic pavilions to sample the very best food from 140 countries under the theme “Feeding the Planet, Energy for Life.”

Bolivia showcased “Quinoa, a Future Sown Thousands of Years Ago,” claiming that the chisaya mama, or “mother of all cereals” as the traditional Bolivian farmers call quinoa, could be one solution to sustainable food sourcing.

Aside from its highly nutritious value, quinoa needs much less water to cultivate than rice. On average, rice requires 15,000 cubic meters of water for 1 hectare, according to Peru’s Ministry of Agriculture. Quinoa only needs 1,000 cubic meters. That’s one water-conscious crop. Along the coast of Peru, known for its arid and desert conditions, fresh water is a limited resource. Peru’s Ministry of Agriculture is encouraging traditional farmers to make the switch from rice to quinoa through its Proquinoa program.

Quinoa’s strength lies in its great adaptability to climate variability, according to the FAO. The Bolivian National Institute of Agricultural and Forestry Innovation ranked quinoa among the 21 seeds most resistant to climate change and an excellent alternative crop in the face of climate change.

So where does your quinoa come from?

Quinoa may be new to the global palate, but it has been eaten continuously for 5,000 years in the Andean regions of Peru, Bolivia, Ecuador and Chile. Legend describes how a sacred bird of the Incas blessed them with the “golden grain.”

Centuries later, quinoa still is predominantly produced by traditional farmers and associations in the highlands of the Andes. Bolivia and Peru are the world’s largest producers of quinoa. Together with Ecuador, the three represent 80% of total quinoa production worldwide.

While a few American companies began working with Bolivian farmers in the 1980s to sell quinoa in upscale U.S. shops, only in the past three years have international food producers joined the quinoa super-food trend.

But can quinoa really be a viable food source for global food security?

Climate change is a universal challenge for global food security. Improving the way we manage agricultural systems and natural resources is fundamental.

Along the quinoa chain, there are several actors at play: traditional farmers, associations, manufacturers and international importers. In recent years, many Andean farmers have concentrated their efforts on quinoa without rotation strategies to ensure better yields and land use. Climate change and its effects on land usage is also a rising factor. The Multilateral Investment Fund, a member of the Inter-American Development Bank Group, approved a $3.9 million technical cooperation to work with Bolivian quinoa producers to improve resiliency to climate change by adopting better production techniques.

As the world descends upon Paris for COP21 this month, climate-smart agriculture is notably absent from main forums. The Global Alliance for Climate-Smart Agriculture, created in 2014 at the UN Climate Summit in New York, would be a natural convener. Only the Global Landscapes Forum is hosting a forum to discuss the barriers and opportunities for scaling up climate-smart agriculture.

If quinoa is to be considered one solution to addressing global food security, proper planning by all players – local and global – must take place to ensure it continues to be produced sustainably for centuries to come.