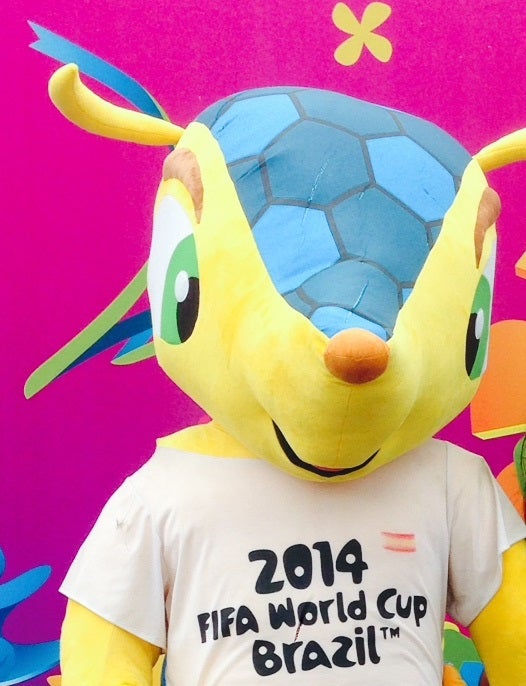 “Fuleco” is its name derived by combining “Futebol” (soccer) with “Ecologia” (ecology), highlighting the role of the World Cup in preserving the environment. Many Brazilians also recognize it as “tatu-bola,” the Three-Banded Armadillo (Tolypeutes tricinctu) that exists only in Brazil.  By either name, it is the FIFA 2014 World Cup mascot, and already a winning player. When the Tatu-Bola is threatened it turns into a round shape, similar in appearance to a soccer ball – making it a fitting mascot for the FIFA 2014 World Cup in Brazil, don’t you think?

But the ball doesn’t stop rolling there. The Tatu-Bola is also a species vulnerable to extinction. According to the IUCN (International Union for Conservation of Nature) the population of Tolypeutes tricinctu has declined by more than 30 percent over the last 15 years. The decline has been due to hunting and the destruction of the open savannahs and dry woodlands in the Northeast of Brazil (the natural habitat of the tatu-bola, an area also known as the caatinga) for sugar cane and soybean plantations.

The FIFA 2014 World Cup has not only raised awareness regarding the possible extinction of its mascot, but also of the grim effects of climate change and deforestation as a whole. The caatinga is very rich in biodiversity; home to over 2,000 species and 15 million people it is one of the five major Brazilian biomes. Historically, it has received little attention from national authorities, but fortunately that has been changing. But the threat of devastation of the caatinga is only exacerbated by the fact that the population that inhabits the area is one of the poorest in Brazil and therefore dependent on natural resources for survival. The destruction of its microclimate due to inappropriate soil management and agricultural techniques can lead to dire changes in the ecosystem, implying an extreme socio-economic impact for those who live there. This raises the importance of sustainable business and production practices that preserve biodiversity, addressing the management of the ecosystem with an integrated approach where all respective players are involved.

The tatu-bola on the sidelines at every World Cup game reminds us of the preservation initiatives being played out on a scale far larger than the World Cup arenas. In May of this year, the Brazilian Ministry of the Environment  launched a campaign specifically targeted on lowering the risk of extinction of the tatu-bola in the next five years through the Chico Mendes Institute for Biodiversity Preservation. In partnership with the Caatinga Association, The Nature Conservancy and the Armadillo Specialist Group, the “Tatu-Bola Project” was launched with the intent of establishing protected areas for the conservation of the tatu-bola and diffusing knowledge about the species and the caatinga, also through promotion of environmental education. And, as with the World Cup, the hype wasn’t just in Brazil: shortly before the “Tatu-Bola Project” was launched, a group of scientists around the world challenged FIFA and the Brazilian government to protect 1,000 hectares of the caatinga for each goal scored during the tournament. With one of the highest averages of goals scored in World Cups so far, 3.5 scored per game, the tatu-bola is already a winner in this World Cup.

The opening touches have already taken place  – so now the ball must keep rolling. The FIFA 2014 World Cup mascot Fuleco, the tatu-bola, has shown us the power businesses and institutions hold in raising awareness, and eventually turning that into action – for a winning combination.