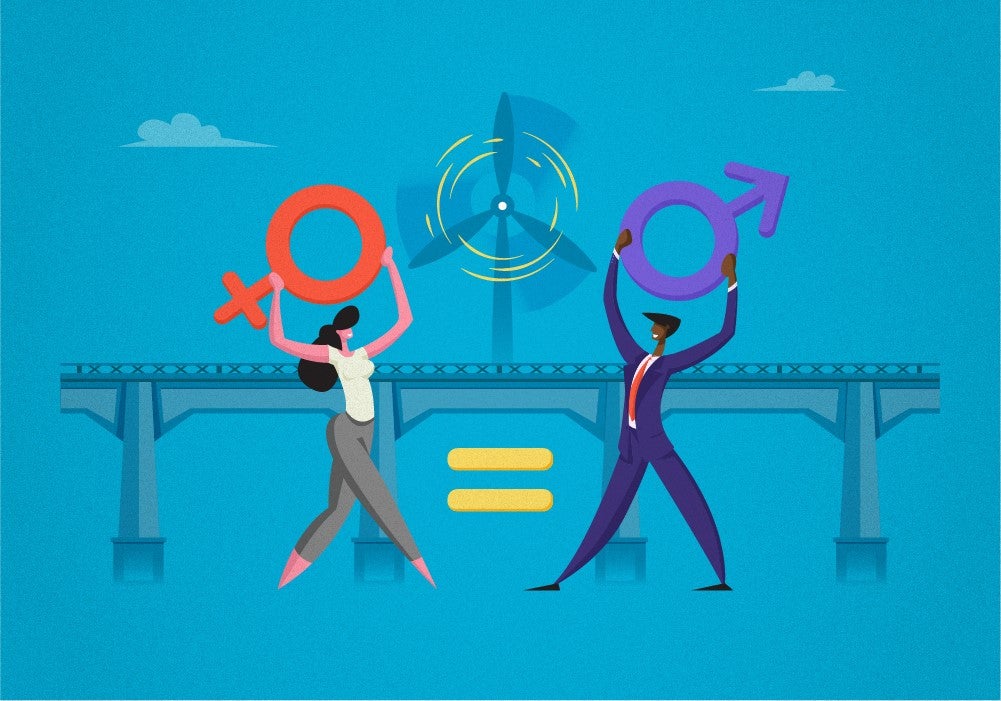 New economic challenges open spaces for inclusion and gender equity. A gender-balanced workforce, especially in the energy and infrastructure sectors, contributes greater productivity and innovation capacity, among other benefits.

The evidence shows that inclusive policies are positive not only for women, but also for the whole of society and for companies themselves. In terms of gender, we are convinced that equality is a win-win.

More than 10.3 million people were working in the renewable energy sector as of 2017, of which just 35 percent were women.

Gender inequality is even higher in other industries such as construction or transport, where women account for less than 15 percent of all employees. Similarly, women are over-represented in the informal economy and underrepresented in management or director roles.

This data does not reflect women’s increasing interest in working in traditionally male (and generally better paid) sectors, nor the growing presence of women in fields such as science, technology, engineering and mathematics.

At IDB Invest, the promotion of equality policies is accomplished through three main lines of action: promoting female leadership in companies; guaranteeing better access to employment for women at all levels and convincing companies to include initiatives led by women in their value chains; and, thirdly, increasing awareness of women’s influence in certain markets to ensure that a specific product offer exists.

With regard to labor market access, in our experience, equality policies that focus on technical assistance to train women are sometimes insufficient to generate the fundamental changes required in organizations. The approach ensures that training gaps among women cannot be used as an excuse to justify their exclusion from the labor market or more senior positions. However, one disadvantage of financing such specific actions is that they leave companies with less room to spearhead their own changes and develop the motivation needed to incorporate them.

The negotiation, definition and application of financial incentives is usually discussed with companies’ finance directors or executive directors. These senior managerial positions tend not to be involved in the implementation of technical training, and wield greater influence when it comes to effectively enforcing equality policies within the organization.

As such, this type of incentives are agreed with companies that request financing from IDB Invest, and are included in loan contracts together with a gender action plan which outlines the desired objectives and how success will be measured. Applying these incentives will allegedly enable companies to access lower loan interest rates in exchange for tangible results in terms of gender equality. As such, one advantage of incentives for inclusion is that they are applied to the extent in which these objectives are met.

Another advantage is that both women and the companies themselves reap the benefits of these gender action plans and can replicate the experience, generating a multiplier effect.

These financial incentives are especially aimed at sectors in Latin America and the Caribbean where women are most underrepresented, such as infrastructure and energy, in order to promote their inclusion in companies at all levels. However, they can be implemented in any industry or economic sector.

One example of the practical application of these incentives is the financing granted to Argentinean company Central Puerto SA for the construction, operation and maintenance of two wind farms—one in Bahía Blanca and the other in Córdoba—in order to contribute to the diversification of Argentina’s energy matrix and sustainability of its power generation capacity. The financial package included an IDB Invest loan with the mobilization of funds from the Canadian Climate Fund for the Private Sector in the Americas (C2F).

The project incorporated a novel agreement to establish financial incentives linked to a gender equality plan which included several actions: an internship program for women to work in technical areas, both within corporate functions and on project implementation; measurement of the increase in women hired and their participation in section processes; gender equality training for all employees; women-only internal communication programs in order to understand their specific needs and concerns within the company; mentoring programs for women to encourage internal promotion; external communication activities to attract female talent; and measures for facilitating part-time work during the six months following maternity leave.

It has been demonstrated that a gender-balanced workforce contributes to increased productivity, innovation capacity and, ultimately, greater benefits. As such, companies have clear financial incentives to continue progressing towards equal opportunities in the workplace.■

To learn more examples of businesses investing in gender equality in the region, visit: https://www.idbinvest.org/en/solutions/gender